"The Department of Agriculture, Water and the Environment (DAWE) has released a document titled “Cost recovery implementation statement: live animal exports 2020-21”. The Statement highlights a significant increase in cost of regulation already incurred and further increases projected. This cost increase will have serious implications on the industry; an impact that will ultimately be felt from the Australian producer to the end customer in our export markets. QLEA and industry support regulation and we support, in principle, a user pay model. But we also support and need robust accountability of the regulator regarding the effective and efficient delivery of regulation.

Over the past 2 years the regulatory reforms that have been implemented have markedly increased the costs associated with regulating the industry. DAWE is now seeking to move to full cost recovery and move these costs onto the industry. Following the events of the Awassi Express (Sheep ship major incident in August 2017), several reviews were commissioned to ‘reform’ the livestock export industry. These reviews produced in excess of 157 recommendations for practice and process change within the Department and industry.

Further, northern exporters have performed strongly in managing in-market nonconformities. 85% of all ESCAS incidents during this same period were self-reported by exporters. Of these nonconformities, not one has resulted in an exporter being banned or suspended from a market.
Over regulation is in many cases there to satisfy a uninformed and disconnected Australian general public.

In 2018, the cost of regulating the livestock export industry was $8.5m. In F2020 it was $20.7m, representing an increase of >140% across two years. Despite the increase, our exporter members (the regulated) have not observed any discernible regulatory improvement in service or effectiveness and efficiency. We are also pushing for a review of management of the regulation process which has led to the untethered cost blow out.

Live export is critical to the northern Australian cattle industry and the region’s economy more broadly. Our international customers have multiple protein alternatives and cost, especially in the developing nations of Asia, is a critical factor to our competitiveness. All industry participants should be accountable for their cost base, including DAWE.

The Department will release further information in April. It is not clear whether this will be positive or negative to the trade. We will keep you informed of further developments."

Stockplace Marketing supports the Live Export Industry and if you wish to support the industry further, please consider joining the Queensland Live Exporters Association. You can find the membership application HERE or view the QLEA website for further information, www.qlea.org/.

If you have sold with us previously over the years, you will already have an account.

There are no up-coming events 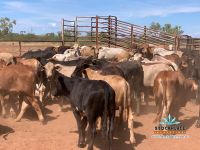